Acting ‘Black’ is not okay.

I know we have seen a lot of dumb teenagers on the Internet acting like they are ‘from the hood’ but that isn’t right and neither is putting on a fake accent. I mean I understand people who have spent most of their life around the areas or around African American people to speak like this. However, faking is just dumb and racist no matter which way you put it. And people who put it on just to ‘relate’ with their friends is plain weird.

So when this woman asked her friend on stop speaking like a ‘lack’ person whenever she got angry. Rather than taking the criticism and trying to fix it, she got pissed and decided to take it to Facebook. Honestly adults don’t do stuff like that. It is always better to communicate and talk this sort of stuff out rather than acting like a justice warrior on social media. If you truly do care about issues that black people have to face every day, you wouldn’t act like this.

From this we can see that she has no heritage like that, and she doesn’t even live around a lot of ‘black people’.

That sort of thing would honestly make anyone feel a bit uncomfortable. 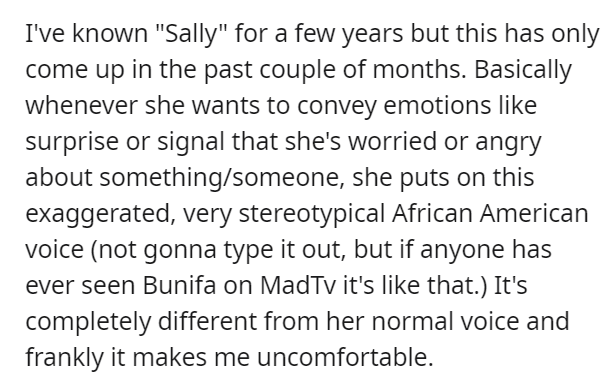 She is definitely not being overly sensitive as this sort of thing is truly horrible. 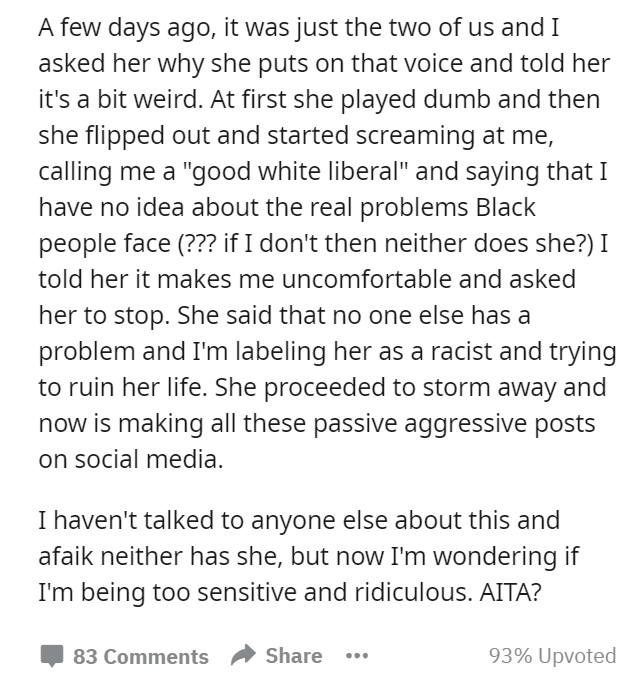 Hi! Mixed kid here! She sounds like every wannabe ghetto white person in my life (including my dad, my cousins, my co-workers, every white kid I went to high school with) who ever told me I was “not really black” because I’m mixed and don’t “talk like a black person!”

Adopting AAVE when you want to sound “aggressive” or “uneducated” is RACIST plain and simple! And not just that, it is cringe worthy to listen to. the only reason black people don’t call it out is because we know that white people (white women especially) will pitch a feckin fit and boohoo cry about how they’re not racist bc they’ve got black friends. And then the flying monkeys descend, and at that point it’s just easier to not speak up.

NTA and Jesus H. Christ you’re doing her a favour, because one of these days an actual black person is going to get tired of her shit and hurt her feelings way more than you did. –rougarousmooch

She is essentially just making light of all the problems that black people face. 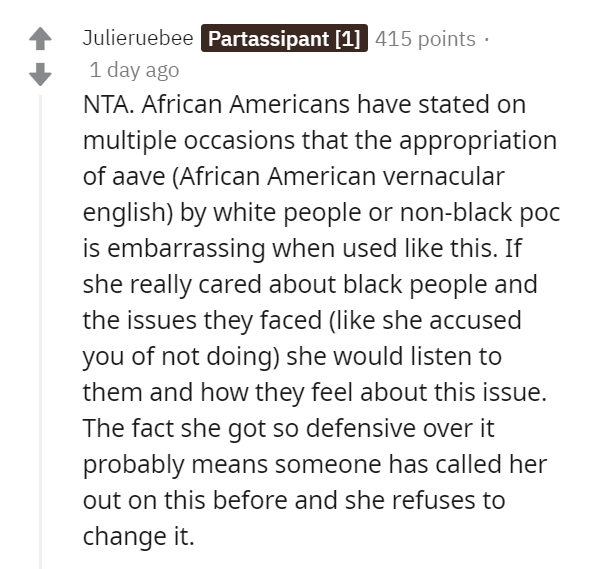 I am not black, so I can’t claim to understand what they have been through and neither can she. 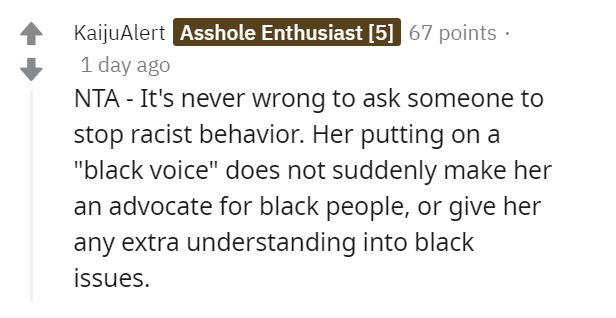 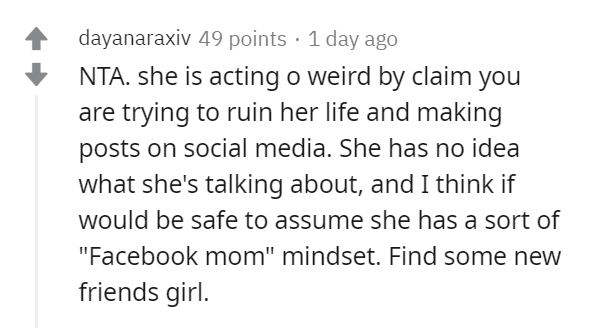 How did none of his friends tell him to stop? 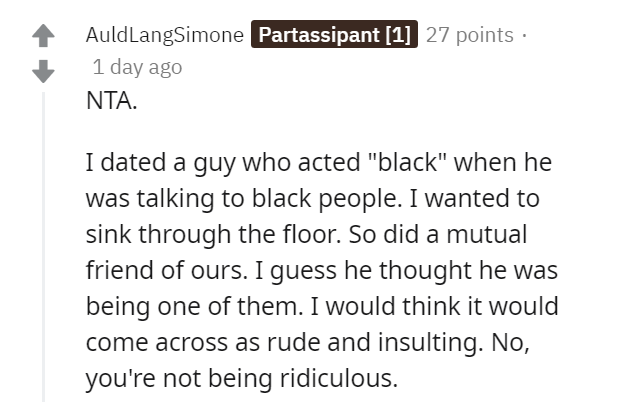 This sort of thing is different. They aren’t trying to act or anything like that. 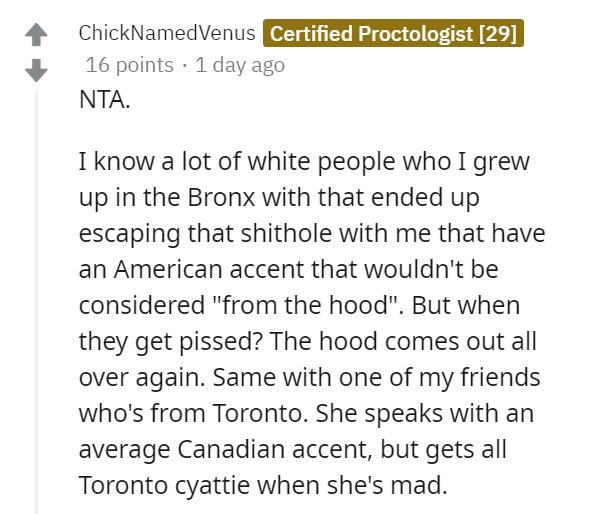 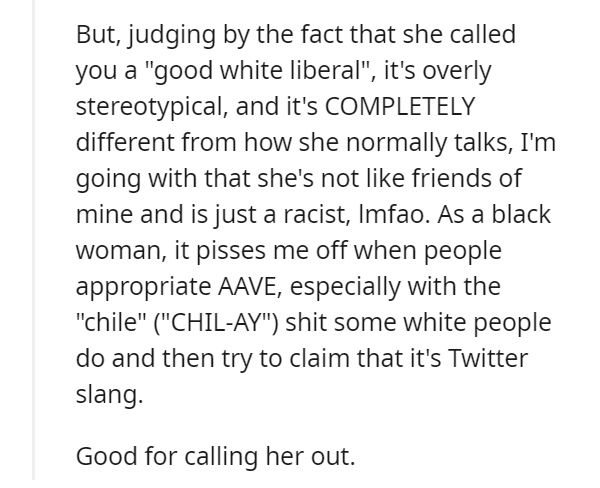 Most friends accept advice from each other rather than getting angry. 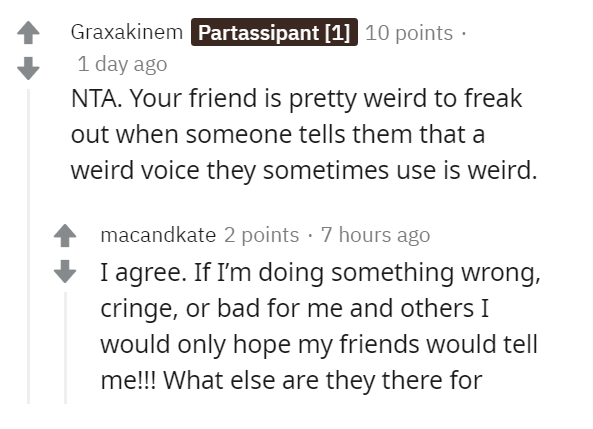 It is going to be a hard no from me on this one. 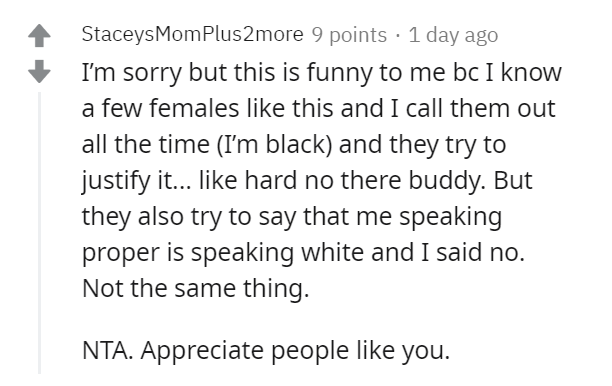 If she wasn’t aware of what she was doing, she would have listened. 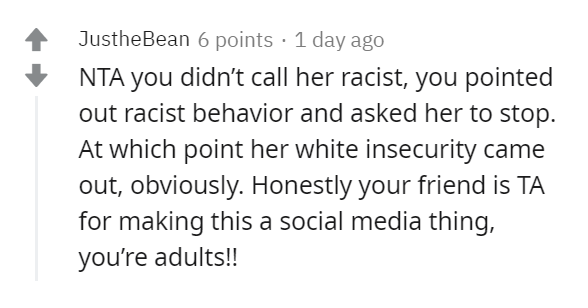 I mean, if you don’t like it, don’t hang out with her? My sister grew up exclusively in a stereotypical “ghetto” area, and when she gets upset she spits out ebonics. It’s not a black thing, it’s a neighbourhood/demographic thing. It’s an unfortunate fact that many of these neighbourhoods are primarily black so that’s where the stereotype comes in I guess.

I grew up in a higher class neighbourhood during my most impressionable years, so I don’t have that same issue, and hearing my sister belt out terminology i don’t even understand when she’s upset can be weird, but I would never tell her to stop talking the way she talks. –SavageInkStudios

She needs to take a long hard look and reaccess this friendship. 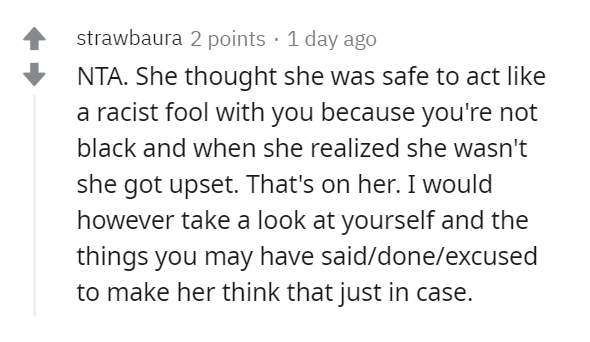 What are your thoughts on this ‘friend’? Comment down below and let us know.